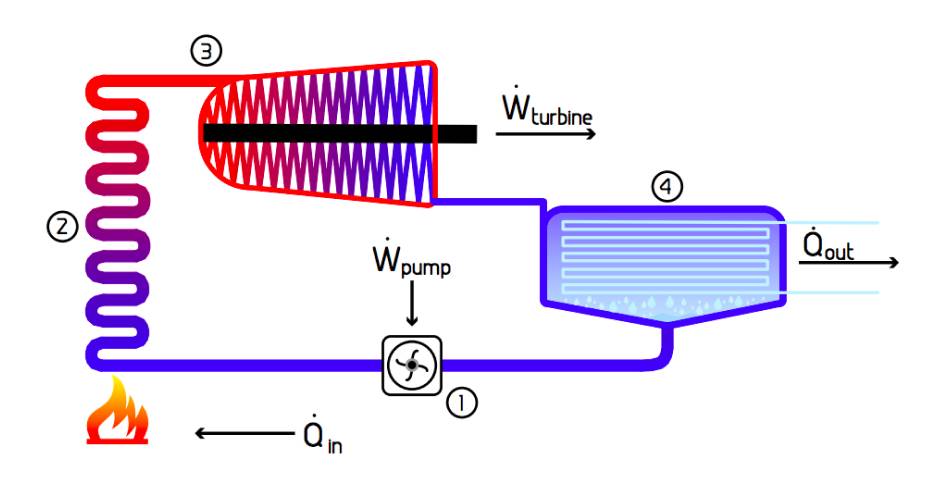 All systems produced by Zuccato Energia are based on the organic Rankine cycle, a high-efficiency thermodynamic cycle that takes its name from its inventor, the Scottish physicist W.J.Macquorn Rankine (1820-1872), one of the fathers of thermodynamics.

The Rankine cycle – and in particular the organic Rankine cycle, has characteristics that make it ideal for heat recovery and the exploitation of low-temperature heat sources in general. Its working principle is simple, but it is better explained through a schematic (see above):

Heat (Qin) is conveyed to an heat exchanger (2) called evaporator, increasing the temperature of a working fluid circulating into it. In the original Rankine cycle this working fluid was just water going into steam, but in the organic Rankine cycle, it is instead an organic fluid with a boiling point far below that of water – which in Zuccato Energia plants is also non- toxic, non-flammable and ozone-friendly.
This fluid, when exposed to heat, expands into a high pressure dry gas (3) that spins a turbine generating mechanical energy (Wturbine).In our plants, this energy is converted into electricity by a direct-drive generator mounted on the turbine impeller shaft, and the electricity is then output to the grid or used in place.

On exiting the turbine the working fluid – now in gas form – is then conveyed to a second heat exchanger (4), called condenser, where it sheds its excess heat condensing back into a liquid. The liquid working fluid is then pumped back into the evaporator heat exchanger by a specific pump (1), thus completing the closed ORC loop.

Excess heat released in the condenser (Qout) is in itself an exploitable thermal resource which can be used directly, e.g. to preheat fuel or dessiccate biomass about to be burned, thus reducing its water content and increasing its energy value. In purpose-designed systems (e.g. our CHP-series modules), excess heat temperature is high enough for combined heat and power generation (aka cogeneration) or for combined heat, power, and cold generation (aka trigeneration) with the use of heat absorbers.